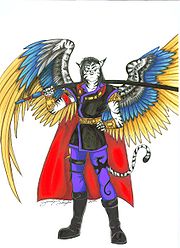 Ryudo Lee is a roleplay character that was a part of several roleplaying games. The character was originally developed as a Furcadia character. In Furcadia, a Strict RP Guild was created called Legend Of The Dragon, in which most of Ryudo's backstory was developed. Ryudo was eventually used in forum roleplays and Dungeons & Dragons games.

Ryudo Lee is an adult winged white tiger with long black hair, and yellow eyes. His usual outfit is a black and blue vest, a pair of pants with a silhouette of a dragon wrapped around the left leg, a red cape, and thick black boots. He sometimes carries a broadsword, and often has a dagger strapped to one leg.

Ryudo is primarily a sword fighter and generally has little use for magic. But he does possess a few potent abilities that he utilizes. 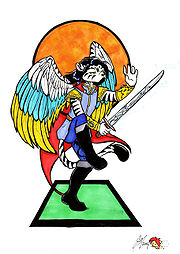 Ryudo used to carry a sword with a very long blade that was known as the Einhander. The sword was forged by evil with materials only found in Hell. As it turned out, the Einhander was beginning to sap Ryudo's strength, and if he had kept it, it would have completely consumed him. But the sword was cursed so that he would be unable to get rid of it. But through certain channels, Ryudo learned that to free himself, the Einhander had to be broken. However, the blade was supposedly unbreakable, unless it was broken by a weapon made of the same material. It was not easy, but a hammer was forged using the same materials. But there was another problem. If someone were to break the Einhander, the person who broke it would die, due to the immense evil power stored in the blade. But there was a volunteer: Yuki, the Incarnation of Evil (aka the Devil, Satan, etc) in this universe. She owed Ryudo for a private favor, and volunteered to break the Einhander, in exchange for keeping the evil power held in the blade, and to keep the hammer that was forged. It was agreed upon, and Yuki broke The Einhander. In doing so, the material body she inhabited was destroyed, and she was confined to Hell for a period of time until a new material body could be created for her. Ryudo was freed of the curse and could wield a new weapon, one that wouldn't be trying to consume him. The weapon he chose was his family's ancestral weapon, Unity.

Unity was a blade forged to represent the unification of the two families that came together to create the Lee family, many many generations ago. At one time, Unity was thought lost to antiquity, until it was rediscovered by Ryudo's great-grandfather Mido Lee, who was a great mage of his time, and placed the powerful enchantment on it. The enchantment was so great, that most of the power in the blade had to remain dormant, to be partially released by the next generation, and so forth. Mido passed Unity down to his son Ryu, who had no interest in trivial things such as combat. Ryu was more interested in winning the hand of a young lady who would become his wife. Ryu passed down Unity to his son, Kohei, who in turn passed it down to Ryudo. He considered giving it to Hauru, but Hauru's interests lay in his research, not in family "trinkets". Each time Unity is passed down, from father to son, a new piece of Mido's enchantment reveals itself.