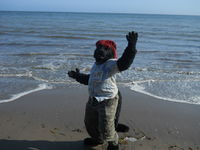 Fursuiting at the beach during the Big Kahuna Beach Party'15

Ryshili was born in Ocean Springs, Mississippi. He lived along the Gulfcoast in the cities of Biloxi, MS and Gulfport, MS until Hurricane Katrina hit in Aug 2005. He moved to California and lived with his friend's family in Bakersfield, CA from Sept 2005 - July 2006, and then moved to Fremont,CA -- where he has been ever since.

His hobbies include writing, drawing, video game, anime, board games, LARP, cosplay, horror movies, reading (etcetc on regular nerdy things) and volunteering on various animal services. He also is in the Therian community, in par with a few unique beliefs on the subject. A participant in the Transgender community as well as an transgender/genderqueer male.

Has a fursuit of his leopard fursona.

Belial the amelasenic/bloodred corn snake. Ganon the western hognose snake. Baby (looking after for a friend) the ball python.

As well as housemate's dog and two cats.

Ryshili portrays himself as a Melanistic Amur Leopard (Black Amur Leopard) with red tufts on ears, neck, and tail. He commonly wears a spiked collar, wristbands, and armbands as well as a ring near the end or beginning of his tail. He is always wearing a dark grey headband, and an earring (commonly a silver hoop with a red-tailed hawk feather) in his right ear.

Ryshili has depicted himself as a hermaphrodite Dromaeosaur named Ira on rare occasions. Ira uses the female pronoun to identify herself. She has a male crest of display feathers on her head. She is an embodiment of his past.

As well as drawing, and a little bit of writing, he attends the Berkeley Furmeet & Crack Chicken furmeets. And goes to conventions: