Ryou-ichi Itou (usually known as Ryou or Ryo) is an artist and modelmaker from Japan. He exhibits original, usually digital works on his Kemonobito blog, as well as photologs of his visits to Tokyo's Wonder Festival (a modelmaking and 'garage kit' convention), which he frequently attends and occasionally trades at.

He also posts periodically at various oekaki boards, most prominently that of Dr Comet.

Ryou's drawn work largely conforms to the Japanese archetype in terms of style, with accentuated facial features and a clean, colourful aesthetic.

His work frequently ventures into risqué and sometimes adult territory, with pin-ups of popular Japanese kemono characters being a staple. He has also created numerous original characters, the most famous being canine sisters "Al & Aria". 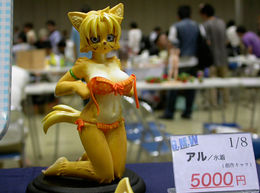 A model of Al, made by Ryou and sold under the B.M.W. Modelworks banner at Wonder Festival 2008.

In addition to his drawn works, Ryou also crafts PVC 'garage kit' models - some based on his original characters - alongside Touji Tanaka under the B.M.W. Modelworks banner. Garage kit models are typically sold in a disassembled, unpainted state; it is up to the buyer to both build and paint the figure.

Current production runs of models are available to purchase through their website (though they are only shipped to addresses in Japan), and the studio frequently exhibit and sell their wares at the Wonder Festival convention.