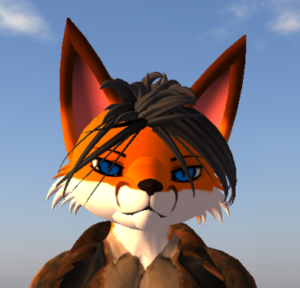 Rycon Bamaisin (aka Laufiair Hexicola) is a male red KZK fox that has remained that way since 2009 (he was an Affinity Husky before that). Rycon is currently the owner of the Official Non-Official Fur Valleys Facebook page where the goal is to bring furries into Second Life so that they might explore digital versions of themselves. Being a resident of the fur valleys since 2007, Rycon felt it was part of his civic duty to help attempt to keep the valleys alive.

Always the go-getter, Rycon is also the head of the Bamaisin Family, Captain of Team Fox Star for RFL/American Cancer Society along with his partner Sage Bamaisin, Webmaster of Black Label Metal Club, Owner of the Card Collector Blog, and a Co-Owner of gaming organization EPiC Nation Gaming along with his wife & Brother-in-Law. As of October 2015 Team Fox Star has raised an estimated L$5,000,000 with the exception of the 2013/2014 year due to a flare up in Sage's cancer (which has since gone into remission).

The Bamaisin Family is a family of furs in the virtual world Second Life that mainly reside in the Fur Valleys.
The family consists of Rycon Bamaisin, his SL/RL parther Sage Bamaisin, their sons Janus & Judist, their daughters Sable, Mew, & Sorra, their partners, and their friends.