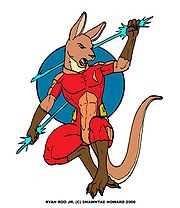 Ryan Roo Jr. is a character in Extinctioners.

A member of the MechaRoos in Shawntae Howard's Extinctioners comic, Ryan Roo Jr. is the twin brother of Tisha Roo Bushtail and leader of the MechaRoos. He's also a family man, having one natural daughter, his mate's daughter, and a natural son. He is often described as cool and collected, if not too focused, in the field. He is skilled with a katana and this fits into his hybrid power, which consists of the ability to form simple objects out of his own telekinesis. Normally this is in the form of energy blades. Though the sword-like blades are his preferred forms, he does possess the ability to form them into other types of simple melee weapons if the situation calls for it.