Russell Jackson is a character in Extinctioners. 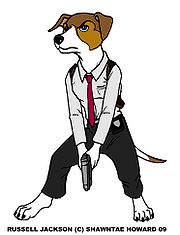 Don't let his small size fool you, Russell is a hard-nosed tough cop with a lot to prove in his own mind. Throughout his years in the academy, all he ever heard was he was too small to actually make the force. This challenge just made him try all the more harder, which pushed him to the head of his class. Now, making detective, Russell has proven to be a very effective tracker and clue finder, often seeing or finding things many of his larger counter parts might over look. The inside joke in the station is that Russell has severe "Little Dog's Complex" and attempts to always take the biggest challenge no matter what it may happen to be. Which would probably explain why his partner, a Great Dane, also happens to be his lover (A fact no one on the force other than Gerald and Damion know and accidentally discovered when they got careless). This knowledge has caused Russell to be the endless butt of many of Gerald's jokes, his most favorite being comments about barking up a tall tree.