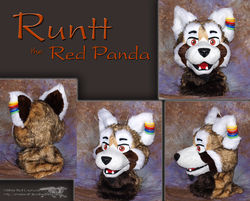 Runtt is a fursuiter, writer and a rock/alternative musician. He records with real instruments; rather than using synthesizers, drum loops, or samples, he plays drums, guitar and some keyboard. His character is a red panda.

Runtt has written and released five songs: "Welcome (Furry Forest Theme)", "Crawl", "Cuddle", "Shy Away" and "Angry Wah". The first three was available on Furry Music Foundation's furrymusic.org under the heading of Furry-Themed songs. All his music is available for download on his Fur Affinity site, including a mix of "Welcome" that is different from the one posted to furrymusic.org.

Runtt has also written an adult comic series called "Life In The Co-Op", along with a spin-off comic called "Tales From The Co-Op". Both comic series are published by Rabbit Valley Comics under their Spooo Presents series. The first issue of "Life In The Co-Op" titled "Moving In" was illustrated by the artist Meesh. This was before Runtt had a proper title for the series. After Meesh decided not to continue with the series, it was taken over by the artist Diman, who continues to illustrate it as the primary artist. Runtt created a Yahoo group specifically for the announcement and discussion of his comic.

After his split with Matthew Ebel, Runtt worked with Foxes And Peppers (Pepper Coyote and Fox Amoore) on their Hashtag album, recording drums. He would later record drums for Pepper Coyote's solo album, "MUH". He has backed both playing drums in their concerts wearing a full fursuit. This would lead to his involvement putting together a full fursuit band called "We Are One", a collaborative of fursuit musicians interested in playing concerts at furry conventions. Their first effort would be a teaser, backing Pepper Coyote at Furpocalypse 2018.[1] They would later join the roster for the Anthrocon 2019 Furry music festival with an 11 piece fursuit band. Later that year they were back at Furpocalypse as a 5 piece.[citation needed]

"The whole idea behind We Are One is to gather as many great fursuiter musicians as I can under one roof and branch out. Not to be the same 4 or 5 suiters every time you see us. I want it to be inclusive and ever expanding." Runtt, 2019.

Welcome (Furry Forest Theme) is a rock and roll style song by Runtt. It was originally written and recorded in 2002 after Runtt met Belic Bear and his mate, K'gra. The song is about how he came to find Belic’s web group, The Furry Forest, a PG-rated forum. Runtt has said that this was the fastest he ever wrote a song.

There are two versions of the song. The first recording can be found on Furrymusic.org. Runtt plays all instruments and sings all vocals himself. The second version is available for download on his Fur Affinity page. This edition is a collaboration of three musicians recording under the band name of The Paw Offs: Belic Bear on guitars and vocals; Sedge Hare on bass guitar and vocals; and Runtt on drums, vocals and keyboards. Runtt sings lead on the verses and Belic sings lead on the chorus. The song has minor changes to the lyrics and a faster tempo compared to the original recording. Runtt states that this is a “first draft mix,” and so far it is the band’s only finished song.

Following its release he collaborated with several musicians, under the name 'We Are One', recorded and released a cover song from the animated movie "Animalympics" called "With You I Can Run Forever" in tribute to the late Dogbomb. It features Chal, Foxes & Peppers, Arc Flash Fox and Rhubarb The Bear. All proceeds from this track goes to the ALS Association in Dogbomb's name.

You can purchase the full album Eulogy and the single on his Bandcamp page here: https://runttwah.bandcamp.com