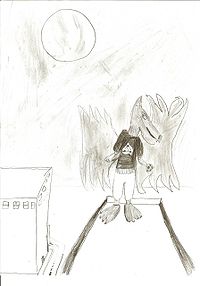 RuneAddySte (born Stephen Campbell) is a UK furry now residing in Hitchin, Hertfordshire. He first became known in the furry community as a Draolf (dragon/wolf hybrid) on Fur Affinity. He creates stories and draws anthro-art on request. Although his art style is somewhat crude in initial contrasts, it is understandable as he hadn't drawn for 5 years prior to joining the fandom.

Campbell works part time as a cleaner at the Four Leaf Clover restaurant in Hitchin, Hertfordshire. He does art in his spare time to "relax from the fast paced world of work. He uses whatever spare time he has drawing, writing fandom stories (including Anthros series), playing on Xbox Live - under the same handle - and plays on RuneScape as S Campbell X. As a gamer, he plays for fun, not for competition, meaning any high scores for him are totally irrelevant.

RuneAddySte (commonly known as Rune to most of the people who contact him) is a Grey Draolf (Dragon Wolf Hybrid), an experiment in creating the ultimate assassin. He was intended to have the loyalty and tracking of a canine and the power and ferocity of a dragon. At a top secret concealment facility, scientists took genes from a dead dragon and spliced them into a wolf embryo. When the Draolf was born, the stubs on its back showed that the experiment was successful. After being trained for 16 years (dragons live 9x longer than a human, making the gene balance out the aging to human level), he asked to leave the facility. The scientists gave him two options: Stay in the facility... or die. Rune took this as a challenge and burst through the complex and out through a fire exit.

Rune has spent the last two years avoiding capture from Anthro-Ranglers (sent by the scientists) and continues to live his life as a vigilante. Where will Rune's wings take him next? Only he knows.

Campbell's Artwork is mostly pencil drawn, consisting of characters in different scenarios. For example, an otter walking along a log to win a lifetime supply of salmon, or a wolf purchasing a rabbit from a pet store. The art is amateur in comparison with other artists on Fur Affinity. By his own admission, his art is based on stories he heard as a child and he tries to adapt it to the furry community.

Campbell is working on two stories, Anthros and Beast. The stories revolve around a cancer cure that has the side effect of warping the patient's body to half-resemble the next animal they touch. (He claims to have acquired and altered the idea from a Goosebumps 2000 book, Cry of the Cat.) The first story in the series, Anthros, is set at the time of the creation of the "vaccine" and revolves around the creator, Liam Catheher (pronounced Kay-Fur) and his subjects. The sequel, Beast, is set 200 years after Anthros and involves Liam's great-great-great-great-granddaughter Amy Leigh Catheher, a cross spawn, who has to find a cure to the virus that is turning pure anthros feral. A cross spawn is a descendant of an anthro and a human with little to no animal features. In Amy's case, it is a rabbit tail (a result which may date back to Liam and his wife, Maria).

The series, of which Campbell is calling Un-Nature-al, will run through 6 stories, of which Anthros will serve as a prequel. The following 5 will follow Amy's life.

Campbell has worked alongside Darrel Brown (AKA Crazy-Husky) on a few occasions. As Brown and Campbell both have similar interests, Campbell chose Brown as an inspiration for one of his first comic attempts; Meeting of the minds. Brown responded to this comic soon after with touched up Microsoft paint work and altered dialog. This got their friendship started and led to a request for Brown to colour and profile Campbell's fursona, Rune. The picture in question was drawn by Australian artist Mea'shana. Campbell stated on his Fur Affinity journal that he intends to do another picture for Brown involving his fursona, Faustus, joining Rune in a battle between Dark Stalker series character, Falicia, and Soul caliber character, Lizardman. This submission should reach Fur Affinity by October.

Back in April 2009, Campbell set up a competition on the Fur Affinity forums for artists to design a front cover for his prequel to the Un-Nature-al series, Anthros. The winner would have their submission used for the books front cover and a promise of a $200 prize for a unanimous Judge vote. The first runner up would also receive a $50 prize and their entry to be used as an insert. The winner of the competition was Pkingsora, with the runner-up being Blackat. Due to unforeseen circumstances, Campbell did not have enough in his Paypal account at the closing of the competition and informed both parties that they would be paid by September 2009.