It is most commonly used on imageboards and forums as fan art or fanfic media, for a variety of reasons.[1] 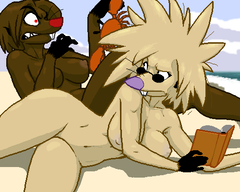 Application of Rule 34 in correlation with Rule 63 on Daggett and Norbert Beaver, from The Angry Beavers

As with mainstream multimedia, sites and examples, the same rule applies to any media created in the furry fandom.

This rule often runs in correlation with: