Ruhe is a quiet and modest mouse. In a roleplay in the fictional city of Layleaux, he has taken control of the sewers of Tapestries with aid from the Bloody Rats, nests of rabid rats that Ruhe controls. 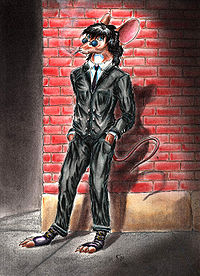 RuheMaus is a proponent of creating "child-safe zones" at furry conventions, with the belief that doing so will help prevent younger furries, or young children of adult furries, from being exposed to harmful material at conventions. In a similar vein, he strongly dislikes ageplay, and had discouraged its practice in the Golden Lash as far as possible.

He also attempts to help out other furries who are homeless, having himself been homeless in the past.

He is married in real life and is employed as a pastry chef.