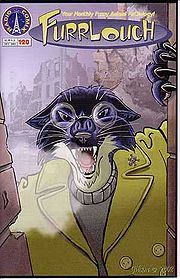 Cover of Furrlough #120, with art by Roz Gibson 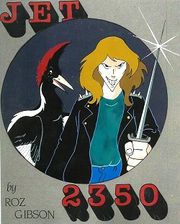 Roz Gibson, also known as Martes, is a furry artist from Southern California, USA, and creator of the character Jack Salem and the comic series The City of Ice. She married Dwight Dutton in 1994.

Born and raised in a poor section of Cleveland, Ohio, USA, Roz relied on her active imagination and unique sense of humor to rise above and overcome her depressing circumstances. Coming from a poor single parent family, there was no money for fun and games but Roz only needed a pencil and paper to make her talent come to life. Her underprivileged upbringing was no longer a handicap but an inspiration for using her inner heart and soul for making artwork unlike any other.

With only her heart and imagination as guiding inspiration, Roz left her mother and brother behind in Cleveland to aspire to greater dreams out west in Los Angeles like any other creative and talented but unrecognized artist.

Roz graduated from CalArts in the 1980s before her career in animation and comics illustration. While attending CalArts, Roz made several furry-themed animated short films. These include Across the Border, about a feline fugitive pursued by a vicious gang of authorities, and Doomsday, an animated short about extinct animals. She roomed with Tracy Kazaleh and Jody Kooistra while a student there.

Roz Gibson was a guest of honor at ConFurence 2002. The Jack Salem character has been prominently featured in many of Roz's comics, such as .357! and Escape to New York, which was serialized in Furrlough.