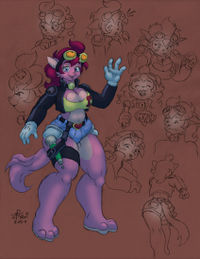 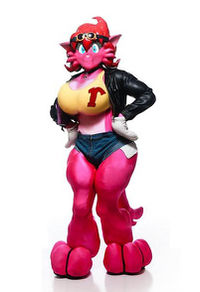 In adult artwork and in appropriate online adult role-play hangouts, Roxikat is overendowed, oversexed, and overeager. This hyperfur version has odd body-modifications that are inspired by Roxi's adventures on adult MUCK roleplay hangouts. Roxi first appeared online as a female, but the player later preferred to roleplay the character as a herm and later as a shemale. The changes were inspired by the artwork of TRUMP and Doug Winger and especially the Mall stories featured on Doug's website.