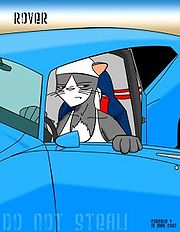 Rover Victor, as drawn by his creator Justice on the 18th of march 2007 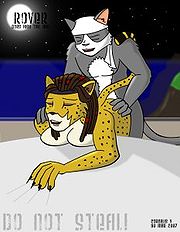 Rover and Zoe from High Tail Hall, drawn by his creator Justice on the 30th of March 2007

Rover and Rio as drawn by Crowchild in the year 2007

Justice is an American artist. He is the creator of Rover Victor, a male feline/character.

Rover (also known as Rover Victor) is a male feline/character created by Justice in 2006. He is a feline, of the generic house cat breed. He is Black and white, but due to the inherent problems drawing him that way his creator changed the coloring to a dark Grey and white. He is 5'11" tall, and his build is supposedly the same as his creator, Justice. He usually wears black, white or khaki clothing, with a biker style leather jacket and black army boots. His white bandanna is also a permanent feature, not taking it off for anything or anyone.

Rover is in his mid 20's. Rover is mostly known for his outrageous appetite for female furs. He is especially fond of the ladies that roam High Tail Hall, his personal favorites being Rio Davis and Zoe. He is heavily into cars, especially the ones from the USA. Ford is his brand of choice, 70's Mustangs and Torino's in particular. But he would not pass up a good Chevy Camaro or Dodge Challenger for that matter. Just as long as it has a manual and a high horsepower V8 under the hood.