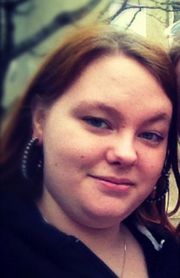 RottenCanines also known as Malin or Rotten (born January 11, 1993), is a freelance artist from Sweden. She joined the online art world as a fanartist for Chicken Run in 2006, but soon evolved into a furry artist. She moved from deviantART to her main account at Furaffinity in late 2008.

Generally Malin is seen as easy to get along with, very playful and outgoing to her friends and customers. She is cautious towards strangers, but is in not any way rude, 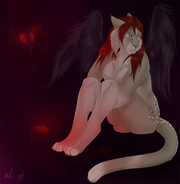 One of RottenCanine's emotional pieces, also featuring her fursona in anthro form

Malin claims to have been an artist for as long as she can remember. She was greatly influenced by the movie Spirit - Stallion of the Cimarron and Chicken Run as a child and mid-teenager. These days she works with a wide array of species, given her status as a commissioner. Her favourite species to work with are Canine and Feline Her art is based more on realistic than most artists but has the essence of her own style, emotional and sexy, always have some sort of deep emotions to it, always improving. A lot of her style is also inspired by Huskie666, including general anatomy, paws and muzzles. A lot of her artwork is inspired by real life events, emotions, songs and lyrics. Her preferred tools is a Wacom Bamboo tablet and the drawing program PaintTool SAI. She used to be a traditional artist, but slowly caught love for digital, but every now and then watercolour brushes and those pencils are literally begging for her to be used.

She has a main Fursona who is a Husky. Her character does not have a deep back story yet due to it's a representation of her real life self and personality is based on her real life self. Her fursona's is a chubby husky with generic husky markings which are peachy pink with a white secondary colour. She has dark red hair, even darker red ears and a stripe that does down her back to her tail tip with the same colour, her skin is blue and eyes are dark blue.

Her fursona, Malin, is often portrayed happy and paired with her boyfriend.

Malin is not active in furry conventions or any other furry activities such as fursuiting. She does have a tail she have gotten from a friend but she has yet not find any reason to use it. Malin don't view herself as a regular furry, but don't mind having things that defy her furriness.

Her boyfriend Brown Wantholf who is a Wantholf, a species of his own creation, is her loving partner.