From WikiFur, the furry encyclopedia.
Jump to: navigation, search
Culture > Fiction works > Comics > Rossweisse
Rossweisse is the title and main character of an anthropomorphic comic by Ted Sheppard. 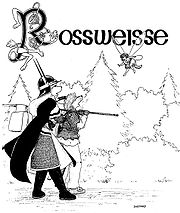 The series first appeared in the furry fanzine Furversion in 1989, and continued later in its own fanzine until 1991. After a 16 year hiatus the series returned with the scanned pages uploaded to Fur Affinity in 2007-2008. Since January 2008 the comic is once again active with new pages being drawn. In January 2010 a new 100 page Rossweisse book was released.

Loosely based on Norse mythology and historical events, the story follows a valkyrie (a minor Norse war goddess), Rathgirth Rossweisse Valkyrja who is exiled to Earth for 1000 years, starting in 1066. She is joined by fellow Aesir exile, Jori Helmingr, and later by a brook faerie named Lilla. 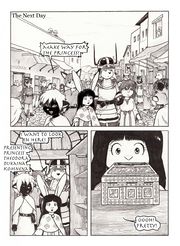 Page from the comic. Rossweisse (accompanied by Jori and Lilla) finds work as a bodyguard to a Byzantine princess, Theodora.