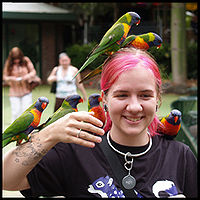 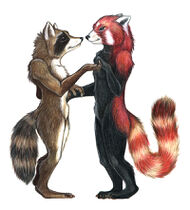 Art by Rose for Colin Raccoon.

Rose Quoll is a female artist who began drawing furry art circa 2002. She created the Furry is Life logo, and made fursuits on commission, working in the then-fashionable "toony" style. Her fursona is a Western Quoll (Dasyurus geoffroii).

Rose's work was very popular for a time, but (perhaps partly as a result) she fell behind with commissions, leading to posts on Artists Beware in 2007 and 2009.[1][2]

Originally from Florida, Rose moved to Brisbane, Queensland, Australia in June of 2004 to live with Stephen Quoll, bringing to fruition a year-long long-distance relationship.

When she first arrived to Australia, she shared accommodations with both Stephen Quoll, Jaffa Ferel, and for a short while, with Canberra furry Kell Bengal. She also lived in a furry sharehouse dubbed the Sanctuary with Stephen Quoll and Whyrl. As of April 2009 she lives with her boyfriend Kelvin, and is no longer involved romantically with Stephen.

Rose originally went to Australia on a tourism visa, and was forced to leave in June 2005 while applying for permanent residency. After stays with Nipper and Colin Raccoon in New Zealand, and her family in Florida, Rose finally received her Australian Temporary Visa, and returned to Australia in April 2006.