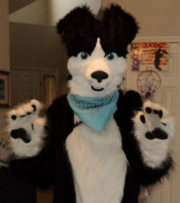 Rose in her new fursuit.

Rose Hexwit (born September 19) is a fursuiter and fursuit maker from Cary, North Carolina. She was introduced to the fandom in 2007 by her friend and has become increasingly involved. She posts regularly on the Fur Affinity forums and is the writer and illustrator of a Pokémon fancomic entitled The Secret Life of Pokémon Breeders.

Rose's original fursona was a brown fox conveniently named Rose. She is hyper and always up for eating and cuddles. Since the development of her new fursona, this fox has been demoted to character status.

In July 2009 Rose decided that a Border Collie better suited her personality and subsequently developed a new fursona. She was called Lily until late April 2010. At that point in time Rose decided that keeping one name would be less confusing. She now refers to herself simply as Rose.

The first is a brown fox partial for her old fursona, Rose. It was the first suit that she ever created. She began its construction shortly after Animazement 2008. Everything but the head was built before Animazement 2009 and premiered at the convention. She built the head that summer out of brown fabric and a wire frame. It sports a moving jaw and was constructed so that she could wear her glasses underneath it.

The second is a Border Collie fullsuit originally named Lily. Construction began during the summer of 2009. Major improvements were made over the last suit, including paw pads and more presentable paws. Lily's head still contains a wire skeleton and a moving jaw. "Follow-me" eyes were attempted, but, it being her first try and all, they did not work out as planned. Lily debuted on Halloween at a neighborhood block party.

In April of 2010 Rose remade Lily's head and changed her name back to Rose. The new head's general appearance was a huge improvement over its predecessor, but the moving jaw aspect had to be sacrificed. Squeakers were added to each ear for fun. The head was very fragile, however, and it was nearly trashed at the local anime convention. She commissioned a new one in September from Furry-Bomb, and it arrived in time for Christmas.