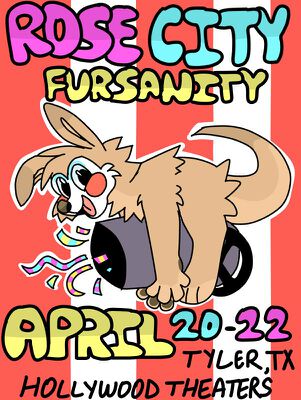 Rose City Fursanity is a "dance heavy" furry/anime convention that first occurred on April 20-22, 2018 with a circus theme at the Hollywood Theaters in Tyler, Texas, USA.[1] The first instance had at least 20 fursuiters[2] and "a staff team of five paid adults and four volunteers".[3] There were three listed dealers: Plushydog, Artwork Tees and Icefelis Studios.

The event was considered by one commenter to be more of an extended furmeet than a convention proper;[4] it was described by the staff as "an event where furries can get together and participate in a small series of coordinated events in a moderately small space" (a theater with four panel rooms upstairs).[3] One of the planned events was a fursuiter pet auction for charity.[5] There was also a Saturday night dance and "floor war".[6]

In August 2018, the event organizers announced that they were looking for new volunteers.[7] As of May 2019 there had been no subsequent communication on social media, some of which has been closed.