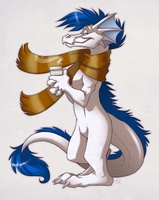 Rooth is a white-scaled blue-maned dragon character on FurryMUCK, created in February of 1991 and recreated March 16, 1991, after a server issue caused a rollback of the database. In that world, he appears as either a quadruped or biped/anthro. He will often assume macro sizes for fun, but is just as often found at a normal human size. He is the personal furry of his player, who lives in Colorado since 1995.

In early 1992, Rooth's player created Rooth'roo, then a simple white kangaroo originally designed to be therapeutic treatment for a brief period of depression. Playing a happy-go-lucky, silly, innocent, naïve, rambunctious, macro[1] kangaroo character was successful in countering the condition. The character evolved in form since then. In addition to naturally growing ever larger (consistent with real-life kangaroos)[2][3], he is presently described as a "snowshooroo" or "snowshoe roo", a species devised by Rooth and Flinthoof Ponypal that is roughly an 80/20 blend of kangaroo and snowshoe hare, explaining his pigmented softer white fur and the disproportionately over-sized feet compared to pure kangaroos. He also sports blue headfur, reminiscent of his dragon alter-ego. For symmetry, his dragon alter-ego took on the handle of Rooth'ragon, although Rooth is sufficient, and usually refers to his dragon persona.

Rooth'roo is credited with developing and marketing the RADPouch™, a soft-skinned container with specially designed straps usually worn at roughly the same position a flyer (female kangaroo) has her pouch. As it is close to the center of gravity and the natural pivot point, the pouch does not shake around quite as much on a kangaroo as a backpack or other similar accessory might. RAD stands for Rooth'roo Anthropomorphic Designs, although the RADPouch™ is the only product to date.

Rooth's player is a patron of furry artists, having commissioned many dozens of artists to draw his characters, including Spunky, Vicky Wyman, Ken Sample, and many others. Rooth's player extends this financial patronage by donating time and expenses to Anthrocon annually, staffing and now managing that convention's Artists' Alley, which seats 128 artists each day of the convention, serving over 250 individual artists over the course of the weekend.

Rooth has a partial fursuit representing his dragon character made by White Wolf of White Wolf Creations, and has appeared in several fursuit parades. The tail for this fursuit is often worn as an accessory by Rooth's player when staffing Artists' Alley to make him easier to spot when he is needed. Rooth is not much of a performer in his fursuit, and only makes appearances in it outside of conventions when costumes are expected, such as Halloween, and even then only once outside a private residence.