Roommates is a webcomic written by Dreamous and drawn by Spelunker Sal.

This comic is about two college students at Aubrey State University, Bowser Jr. and Giancarlo (a Flamedramon), who fall in love with each other. The comic follows the couple through their lives, highlighting on issues that face ordinary gay couples.

The story is split into sections called arcs. Currently there are three arcs.

Arc 1 is an introduction to the main characters of the comic and how they meet. Jr. flirts with Gian who then panics and flees. Later Jr. walks into his new room and discovers that Gian is his roommate for the year. The pair become better acquainted, and together decide to strike up a relationship.

Arc 2 is based a few months after the first arc. Besides the time shift, not much has changed. Gian gets his ear pierced at a local tattoo & piercing parlor; a gift from Jr. The couple then return to college for their sports practice, but Gian runs into trouble in the showers while Jr. is talking to his coach.

Arc 3 only contains seven pages at the moment, opening up on a Jr. and his brother playing video games. A friend of Gian's comes to visit. When Gian was going to get his brother, he met Mondo. Pages three and four reveal a relationship between Olly And Mondo. The new pages, six and seven, show Gian explaining his upcoming one-year anniversary of meeting Bowser Jr., as well as revealing more on Gian's foot fetish.

Other characters of the Roommates World

The only Guest appearances have occurred in Arc 2. These have occurred through either through the winning of competitions, or through paid commission work. Here are the guests in order of appearance. 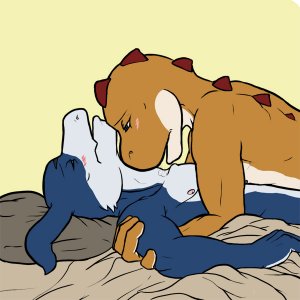 Gian's first is an official side story written by Dreamous. Unlike the main story, it is not a comic, but written in a novel like form. The story is released in parts, with three parts in total.

It is the story of Gian's first intimate encounter and boyfriend at age 14. His boyfriend is a brown Yoshi called Nathan. After a long run (something Nathan and Gian do regularly), they go back home to rest, and Nathan starts rubbing Gian's sensitive feet. Gian becomes aroused, and Nathan notices, deciding to admit to Gian that he has feelings for him. Gian (although embarrassed) admits that he too has feelings for the Yoshi, and the pair decide to take their feelings further.

The pair don't have sex in the comic (Gian is still a virgin at the beginning of the main story), but they do stimulate each other in different ways.

Main characters that are exclusively mentioned in this side story:

Other minor characters, who are exclusively mentioned in this side story: 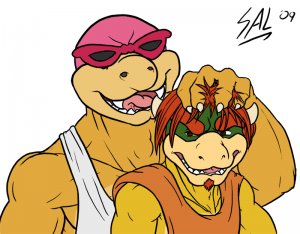 These are my reflections is a side story written by TreIII. Unlike the main story, it is not a comic, but written in a novel like form that is similar to the other side story. The story is organized into chapters. In total, there are 11 chapters released, with two side-chapters that detail Junior's relationship with his first boyfriend back when he was 15 years old.

It is a story about how Bowser Jr. came around to being the kind of person he is in the main story, how he was with his family, and how he 'came out of the closet'. The story is mainly humorous, but does contain adult content in the side chapters. It also shows more on the lives of his siblings.

The story starts just a day before Jr's senior prom at high school, and the return of long-time family friend (as well as a former personal tutor for Jr), Hanbei.

Characters that are exclusively mentioned in this side story:

Eight uncut comic pages were released, showing a secret relationship between Mondo and Olly. The comic takes place in Olly's Dorm just after the fight in the showers with Gian and Bowser Jr. The comic starts with Olly taking alcohol out of his mini-fridge and beginning to drink it. While he and Mondo complain about losing the fight to "a couple of fags," they begin to think back to when they'd hang out with Bowser Jr., and soon realize that Bowser Jr. was apparently hitting on them in the past. This causes Mondo to show favoring towards Bowser Jr.'s choice of sexuality, much to Olly's "hatred" towards gays. While Olly stumbles over to a wall, Mondo thinks about all of the gay things Olly has previously done, and tries to reach out to help him. Olly retaliates and jumps Mondo, repeatedly calling him a "faggot." While Olly still tries to show dominance and deny his sexuality, the two eventually finish, causing Mondo to break into laughter when Olly calls him a "faggot" again. Mondo then opens up to Olly, telling him it's okay to be with who he is. Olly states he "didn't ask to like this stuff," causing the comic series to end in a big question.