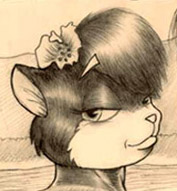 Roochak specializes in highly detailed pencil drawings blending "realistic" and "cartoony" elements. He draws exclusively in pencil and does not color his works. He is fond of tattoos, and many of his characters (or reinterpretations of popular characters such as Clarissa from PlayMouse) have tattoos. He is known to put large amounts of detail into hands, feet, and musculature, while leaving faces and other parts of the body distinctively "toony." This blending of elements results in his unique style.

Roochak, after a thirteen year break from creating his own comics, is currently drawing several X-rated comic book stories for eventual publication. 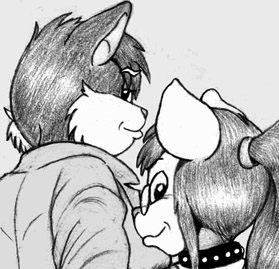 Sheila Ann Lacy is a tall, buxom black cat whose trademark is her short, eye-curtain haircut. Created in the early 1990s, her personality has been heavily influenced by the writers KalebFenoir, Steel Ankh, Gabriel LaVedier, RedStaR99, and especially D'Otter. Sheila, who grew up in a poor neighborhood in Detroit, is a wealthy, powerful businesswoman, famous from her years as a high-profile model and from her as-yet-unspecified activities in the entertainment industry. Sheila is openly bisexual, and has not hesitated to use her looks and her ravenous sexual appetite to her advantage in the business world.

Sandi Carter is a small, golden-furred mouse with an elaborate head of fiery red hair. Possessing a genius-level IQ, advanced degrees in engineering and robotics, and extensive martial arts training, Sandi has assumed the duties of Sheila's personal manager and bodyguard.

The two women live together as lovers and lifemates. They are not monogamous; they pursue other lovers together and separately, and share the sexual attentions of the mysterious fox Kuro St. James. To complicate matters, Kuro is being pursued, for unspecified reasons, by Sheila's brother, Matt McAfee, a federal agent.

Jimmy Lee Starbird is a mouse-rat hybrid character created by Roochak. He has a long, whiplike tail and buck teeth, along with large ears. As Roochak draws only in pencil and does not color his works, his color is unknown, although it is most likely white, off white, or light gray, considering how he is shaded. He has a tuft of hair between his ears that is the same color as his fur. He has three tribal tattoos, one on each shoulder and one at the base of his tail. They are considered to be his "signature" symbol, similar to Zig Zag's stripes. He wears glasses in some pictures. He is flirtatious and very horny, and will "dispense" sex without warning at times.

His backstory is somewhat amorphous, and is largely influenced by Roland Guiscard's writing involving him. He appears to have been born and raised in the south (exactly where is never specified, though one story hints at Alabama), and has a slight southern accent. He has a violent brother, although he has appeared in only one story and one picture. Originally a stripper at a gay club who was working his way through college, he has since become a professional pornstar. He is bisexual, although in earlier works he appears to be almost exclusively gay, and in later works almost exclusively heterosexual.

Though his sexual interest in women has been the focus of recent works, his attraction to males, which earned him the college nickname "The Angel of Sex," remains undiminished.