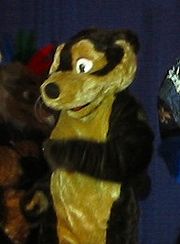 Ronin Otter is a fursuiter and puppeteer who lives in Massachusetts, USA.[1]

At Anthrocon 2004, Ronin and Dex performed a skit called Animatronics Gone Wrong as the last act of the Masquerade. A photo of the two suiters appears on the back cover of the Anthrocon 2004 DVD.

Ronin Otter's fursuit is a otter suit made by Arend Studios. The fursuit Seth Otter is an almost identical suit from Arend, with Seth being slightly taller, with the addition of teeth and a tuft of hair on his head.

Ronin has made several appearances on the Funday Pawpet Show (FPS), performing as different guest characters. He most often uses a ferret character known as Kniop who speaks in gibberish only understandable by other members of the cast. Kniop is sometimes known as the "Anti-Poink" since his personality is considered the antithesis to the regular character's.

Ronin is also the puppeteer of the Electrical Hazard Pumpkin character. The plastic, sideburns-equipped Halloween pumpkin lights up whenever it speaks. Rumor has it that the puppeteer is backstage plugging and un-plugging the socket for the pumpkin in time with his words, however this would be a fire hazard and Ronin denies doing so.[citation needed]

Ronin's appearances on FPS also included him taking part in the Subservient Fursuiter portion of the show in his costume.[2][3] Ronin also makes sound effects akin to the phaser weapons on Star Trek and noises representing the movement of robotic limbs.[citation needed]