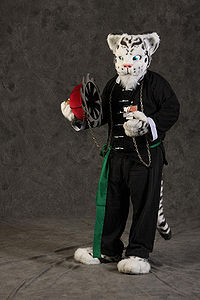 SmackJackal, also known as Farix and Sean Wally, is a furry fan and artist has been associated with the furry fandom since the late 1980’s, having been introduced to it while a freshman in high school. He quickly found his way to the larger on-line Furry community through the use of dial-up computer systems such as the Tiger's Den BBS and the Internet under the handle/nickname of Farix. He also became active with local furry groups, such as those associated with the Prancing Skiltaire, and helped out as a staff member at the ConFurence 4 through ConFurence 7 conventions held in Orange County, California.

In 1994, SmackJackal moved to the Silicon Valley to begin a career in systems administration and systems engineering. Though he dropped out of the University of Nevada, Reno, in 1994 he has been returned to school in pursuit of a degree in business management. 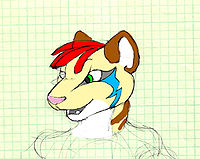 Flash by SmackJackal
SmackJackal is a motorcyclist, sport compact car fiend, amateur photographer/videographer and a one time serious gamer. Though he is not currently active in the art SmackJackal holds a green belt in the art of Kung Fu San Soo. When not distracting himself with cars, motorcycles, fursuits, travel or education SmackJackal enjoys taking up new personal challenges and hobbies.

From time to time SmackJackal has been known to pick up a pencil in the act of drawing or writing though he does not pursue either interest with a great amount of dedication or passion, they are primarily diversions to consume slack space in his busy schedule. He was an early member and contributor to the Furthest North Crew APA and provided artwork that became the cover of first issue of Anthropomorphine (as Sean Wally).[1] He has not sought wide notoriety through his artistic efforts with drawing or writing.

SmackJackal has been a fairly regular convention goer since 1989 when he attended his first science fiction convention in Los Angeles, California. Since then he's made a point of atending and assisting with a wide range of conventions every year, particularly sci-fi, gaming and a furry conventions.

Also at Further Confusion 2012, SmackJackal was elected to the board of Anthropomorphic Arts and Education along with WhiteyFox, SmilingWolf, Foxcar, and Berg Polarbear.

Other fan names and characters[edit]

SmackJackal does not lay claim to any particular concept as a fursona or personal furry though he does generally identify most closely with canine animals, most obviously jackals, coyotes, and foxes as well as rabbits for strange reasons he is not fully comfortable talking about. The fursuit characters of Rong-Wei and Baadenov are representations of SmackJackal’s astrological signs but do not hold much deeper significance than that.

At Anthrocon in 2005 SmackJackal set himself the challenge of creating a half-way decent looking fursuit with zero help from friends using only online sources. Shortly afterwards he completed his first partial, a nameless fox, which he only wore once at Further Confusion 2006. By 2007 he had completed his second partial suit, a white tiger named Rong-Wei. Rong-Wei was constructed to as a compliment to Further Confusion 2008's theme, The Fur East. Since 2008 SmackJackal has constructed a number of fursuits and presented on fursuit construction panels at Further Confusion.

Rong-Wei is the character name of a fursuit created by SmackJackal for Further Confusion 2008 as a compliment to the convent's theme, The Fur East. The character's concept is that of white tiger of Chinese ancestry versed in at least one form of fighting art and his species, tiger, is the actual Chinese astrological sign of the suit's creator. His name was chosen as a play on words between English and Chinese, the words rong and wei translate to 'martial' and 'strong' which reflect the character's martial arts skills but when spoken quickly sounds like "wrong way." Rong-Wei wears either a traditional kung fu uniform or a white Chinese long coat and wields a Flying Guillotine prop created by DustyKat.

An orange fox created for the "Drink Foxes" costuming project. The character's concept is that of a burnt out beach bum. This suit is rarely worn by SmackJackal himself and is due to be remade.

A large, red rabbit created as a play on play on words and to celebrate The Year of the Rabbit. Buck Fiddy's concept is that of a hip-hop rabbit and his name is a play on $1.50 which in itself is a play on name of rap artist 50 Cent's name.

Described by SmackJackal as a "Russian pygmy racing goat", this is the most recent character/fursuit in SmackJackal's personal inventory. Unlike his previous fursuits which he created himself, Baadinov was commissioned from Arend Studios. Much like Rong-Wei, this character has a personal connection through astrology as SmackJackal's astrological sign is Capricorn.