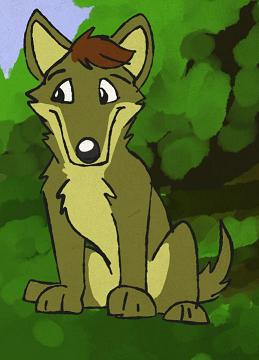 Roko the coyote, as he appears in "The Puppy That Played Fetch Across the Sky".

Roko (pronounced "rock-oh!") is a writer from northern Alabama. He is most easily distinguishable by his copper-colored hair. He enjoys making his own alternative and electronic music, spending time with family and friends, and the outdoors. Some of his favorite hobbies include geocaching, hiking, camping, biking, stargazing, and exploring caves.

"Roko the Rocket Coyote" was a nickname given to him years ago that is rarely used today. It is still uncertain whether the name was a reference to his proximity to The Rocket City (Huntsville, Alabama), or the fact that he is bouncy and always rockets from one task to another.

Roko is a creator of furry fiction, and has been focusing on stories featuring anthropomorphic animals since he was a pre-teen. Stories (as well as previews of published works) can be found on his FurAffinity and SoFurry accounts. He uses the pseudonym "Roko" for some of his works (especially those intended for mature audiences); but also enjoys writing children's books and books aimed at younger readers under his birth name.

On January 13, 2006, Roko and his best friend Kirron announced that they had become a couple. Around two years later, Kirron moved in with Roko. Currently, they share a home in a small town in Alabama.

On January 13, 2013, on their seventh anniversary; Roko asked for Kirron's hand in marriage. The wedding date is undecided, as same-sex marriage is still not recognized in their home state.