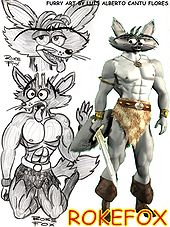 Rokefox is an anthro artist who is located in Mexico.

His fox fursona is a good friend, sincere and kind. He is a good citizen, honest, loyal and erudite, gentlemanly with others, and very generous. Rokefox is an inventor, and likes engineering and chemistry. He is also an investigator, criminologist and baseball player.

Rokefox really enjoys chicken-flavored instant soups. He likes to fight with friends that tell him he's stupid, and he has no enemies because he kills them with bites.

Anna Fox: She is the sister of Rokefox. Note: This are the specifications of her a while ago, for reasons she stablished. She's a student at law school and likes to play the electric guitar. She likes rock and is a fan of Alex Lora. And says tha one day she'll form a rock band. She loves to watch Cartoon Network and the Hi-Hi Puffy Ami Yumi cartoons. Buuuuut...

She's currently married and all her dreams were ruined. It can't be helped lil' sis, that's how life is.

Zorma Fox: Rokefox's wife, a nurse and works in a university hospital. She likes to paint landscapes and is a common scold when Rokefox makes a mess in the house. She sees life like a constant task and almost never likes to rest.

Her husband Rokefox thinks he married a squirrel instead of his beloved wife, he, he, he. She likes to talk so much about her job that she has influenced Zuzy Fox to follow her example and become a graduate nurse as well.

Zuzy Fox. This was Rokefox's first drawing of her face.
Zuzy Fox:

She is a friend of Anna Fox and likes to sing and dance and is superb in volleyball. Her first boyfriend was Lupito Fox for sentimental reasons.

She is a foxy who can't start to work as a lifeguard at the beach because of her short age. She's 17 years old and is still savouring the fruits of working and earning money. But is too working hard for her studies; she studies in the nursing faculty of her city.

One day she's going to be a graduate nurse.