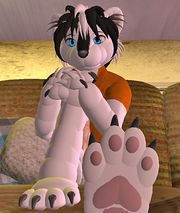 Rogerio Collins aka SkunkSky is a Brazlian member of furry fandom. He is an Administrator of Brazil Furry Island —BFI—, the first furry community in portuguese language in Second Life.

His initiation into fandom took place in the late 2001, although he was unaware of the meaning of the term "furry". He adopted the dragon fursona since he felt as one of this mythical character.

By having more knowledge about the subject-matter, at the end of 2006 he adopts the skunk fursona, because he always identified with this animal. "— I love the skunk colors!", he says.
In MSN his name is SkunkSky, however he is well known by the name of Rogerio Collins. 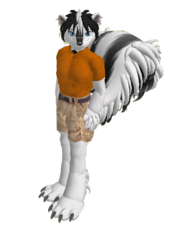 Rogério is a smooth, solicitous skunk and likes to talk. Always looking to make friends as much as possible.
In 2009, Roger Collins along with Bahamut Faulds and Zuko Vyper manage the Second Life community "Vila dos Encantos" —"Village Of Enchantment"—, in which some time later was definitely named "Brazil Furry Island", under the command of Felix White.

He has extra-fandom activities in Second Life, providing support for new residents of the "Ilha da Ajuda" —"Help Island"—. This is a great community that welcomes all visitors, humans and furries. It occupies an entire land called "Inside Me". Among the various activities of "Ilha da Ajuda", stand out courses taught by experts in each specialty.