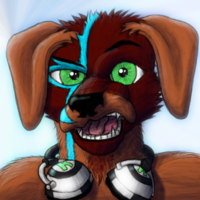 Rodrick The Rhodesian Ridgeback, previously known as Zizix, is the online alias of a Canadian furry fandom musician and writer. Roderick the Rhodesian was born on April 7th, 1994, in Dubai, where he lived for a total of 4 years before moving West to Ontario, Canada. On arrival to North America in 1998, he soon began absorbing its art and music cultures. Currently, he is working on an anthropomorphic themed novel which he plans on publishing under FurPlanet next year in 2012, and a solo music album, Who Needs Reality?.[1]

At the age of 8, Roderick The Rhodesian began to show artistic talent. In grade five (in 2003) he began writing novels and every year after, he wrote another (though none of these were published because they were incomplete).

When asked about the reason behind his growing list of unfinished novels, Roderick The Rhodesian said; "I just do it for the sake of writing! Each and every time I scratch and start over, I gain more experience. One day, I'll make something that will truly be a masterpiece, but till then, I'm just drifting about on the river of writing I'm creating! I've got lots of time."

Most recently though, it seems as though this trend of unfinished books is coming to an end because Roderick The Rhodesian has claimed that he plans on finally publishing his recently started Sci-fi thriller novel which remains untitled for now.

Family members claim, that by the age of 6, Rodrick The Rhodesian began improvised rapping and singing along to his favorite songs. His musical endeavors only became more prevalent as he grew up and from grade 7-10 he particpated in his school's choirs.

At the age of 16, Roderick was coincidentally introduced by a friend to a music creation software entitled 'Acoustica Mixcraft'. Practically in that same week, did he go out and download the trial version. Very soon afterwords, he got the full version of it.

Roderick The Rhodesian's first song ever was entitled the 'Moods of Music' and was 10 minutes long.

As Roderick The Rhodesian began to create more songs, the genre switched from orchestral to general techno where he created songs such as 'Flutter', 'Hypertension', 'God Of The Machine' amongst numerous others. [2]

'Dreaming In Color' which featured a variety of genres from Orchestral, to Rock, to Trance and Electronica, was Roderick The Rhodesian's first attempt at creating an Album. This ended though before being complete with the changing of his music creation program.

As Roderick the Rhodesian's amateur career continued, he found himself running out of good loops to use in his current program. For a few weeks he went off the grid and searched for his next program.

After a brief experimentation with Fruity Loops 7 (that he created two unsuccessful songs with), he found Music Creator 6 and after taking the trial, bought the program and again began to make music.

The new songs he was creating had begun to reflect his efforts, no longer a childish hobby, it took on a quest to become more professional.

Roderick the Rhodesian's most recent album 'Who Needs Reality?' is a composition of his best older songs and all the new songs he's created. 'Who Needs Reality?' includes Indie Rock and Electro-Pop pieces. Each week (usually a Wednesday) he adds another song to his album on Furaffinity. So far, the songs are;

An Electro Pop piece entitled 'Boyz Beware'. Where he makes fun of the anti-gay ad campaigns of the 1950's [3]

An Electro pop piece entitled 'The Clockmaster'. Where he sings about time catching up to him and the Master of Time. [4]

An Indi Rock piece entitled 'To Be A Dog'. Where he sings about transforming into a dog & what his life would be like as a dog. [5]

An Indie Rock piece entitled 'The Good Days' is his simplest song yet, where it's just him, a guitar, some back up drums and bass and a 100% unedited voice. In this song he sings about life and what it is like to grow old with the individual that you truly love. [6]

An Indie Rock Piece entitled 'Well Fuck' is where he sings about all the corruption politics and war have caused. An interesting thing to take note, is that though the tone of the song is upbeat the lyrics are rather depressing.[7]

When asked about the meaning behind this he said; "The two different tones represent the truth and then the facade put up to block the truth. The upbeat instruments are like the people high up who cast the facade and the actual lyrics and singing distant from time to time is the quieter truth!" [8]