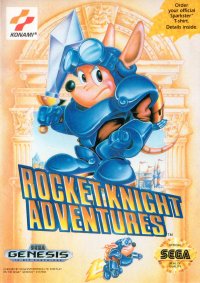 The box of the Genesis version of Rocket Knight Adventures

Rocket Knight Adventures was a side-scrolling adventure game featuring anthropomorphic opossums and pigs created by Konami in 1993 as it's debut title for the Sega Genesis.

Zebulos is a kingdom created by it's first king El Zebulos. El Zebulos was a brave hero who fought a would-be band of invaders who sailed in an evil ship called the "Pig Star". Despite long odds, El Zebulos fought and defeated the invaders and had the Pig Star placed under a magical seal to keep it from enemy hands. The "Key to the Seal" was guarded by Zebulos and his decendants.Because of the power of the Pig Star, the kingdom of Zebulos was always the target of attacks. The Rocket Knights, elite armoured warriors with mystical swords, were formed to protect the kingdom and the key.

The kingdom has recently been attacked by Emperor Devligus whose robot-led army has pushed the kingdom of Zebulos to the point of crumbling. Princess Sherry is kidnapped by Axle Gear for use as a hostage and leverage to obtain the Key to the Seal. Seeking revenge, Sparkster, a Rocket Knight, journeys to Castle Zebulan where he hopes to confront Axle Gear for injuring his master ten-years previous.

Sparkster: A war orphan, he is raised to become a Rocket Knight. His master was permanently disabled by the Black Knight Axle Gear. Sparkster, now on a mission to avenge his master, journeys to the kingdom of Zebulos where he hopes to confront Axle Gear.

Axle Gear, the Black Knight: A member of the Black Knights (Rocket Knights who have been corrupted by power and greed), Axle Gear attempted to steal an ancient book containing the secrets of the Rocket Knights from Sparkster's master, disabling him in the process. He is now second in command to Emperor Devligus, leader of the Imperial army. He is also secretly in love with Princess Sherry.

Princess Sherry: The slightly naive daughter of King Zebulos, she is the target of the kidnapping by Emperor Devligus. She stands to inherit the Key to the Seal.

King Zebulos: A widower whose only child is Princess Sherry, he is a descendant of the royal Zebulos family that has always protected the Key to the Seal. He is loved by his people for his tolerance and fairness.

Emperor Devligus Devotindos: He dug and revived robots from the ruins of the old Empire and single-handedly built the porcine army of the Devotindos Empire. He controls neighbouring countries and planets with his powers of hypnosis but his ultimate goal remains unclear.

Other Enemies: Sparkster faces a variety of enemies including Pig Soldiers, Invincible(?) Armored Pigs, Pig Tanks, Pulsating Plasma Blasters, and the Repulsive Raccoon Robot, amongst others.

Gameplay is very straight-forward and easy to learn, effectively using the D-pad and two buttons, one for attack and one for jump. By pressing and holding the attack button, one can power up the rocket pack and execute a spinning attack, useful for larger enemies. By pressing and holding the attack button and pressing the D-pad in a direction, Sparkster can perform a rocket charged attack and can bounce off walls to climb to higher levels. Also, being an oppossum, Sparkster can use his tail to hang from trees or anchor himself in water levels.

Initially garnering luke-warm reviews, Rocket Knight Adventures has since become a favourite amongst gamers taking an average rating of 9 out of 10. It did, however, sell well enough to create a sequel titled simply Sparkster for both the Sega Genesis and Super Nintendo gaming systems.