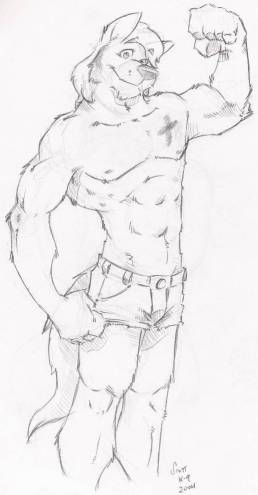 Robert James "RJ" Tremor is a white wolf furry who got his start on the internet in the SWAT Kats fandom in the late 90's. After being exposed to Herbie Bearclaw's artwork on the Orlando F.A.N. art archive, he found his calling in the fandom as a tall, musclebound white wolf most always wearing mid-thigh length jean shorts, long red hair flowing from his head and between the ears, and a prominent red cross emblazoned over his heart signifying his beliefs as a Christian. He's experimented as being a dragon and being a winged wolf, Spiritwing and Phoenix Wolf respectively, but RJ is his "Personal Furry".

With his frequenting Tapestries here and there and FurryMUCK prominently, and especially the wildly-growing Second Life (so much that a new character has grown from him, SL's only musclecoon, Richter Johnathan), not to mention being a prolific LiveJournal friend machine and the communities and mail lists he is on, he's grown a bit more visible, dabbling in screenshots and putting art done for him/by him on Fur Affinity. He had tried his paw at art early on in the fandom, but lost his touch after some minorly traumatic events in his life. Still, he does a little bit of writing every now and again.

His interests include German and Asian cars, techno and trance music, gaming of most types, con-going, WWE, and being a clearance rack fashion freak.