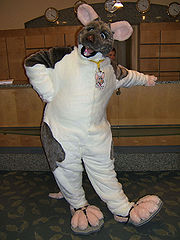 Rizzo the Rat at Eurofurence 14
Colifox was a furry artist and security/network architect[1] who lives in Birmingham, United Kingdom with fellow fursuiter Badgerguy. His fursona used to be a lion with a fox's tail. However, he now relates most to his rat character, Rizzo the Rat.