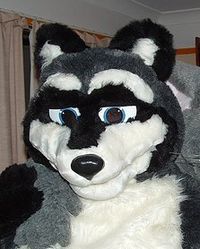 Ristin, full Ristin Raccoon, is a fursuiter and member of the Westhaven furry household in Mount Gravatt, Brisbane, Queensland, Australia.[1] Ristin was the life partner of Marko the Rat until the passing of Marko in March 18, 2018.

Ristin is a chemical engineer and Justice of the Peace.

Ristin and Marko the Rat first met in late 2003 when Marko went to Melbourne for MiDFur; the meeting was organized by Oz Kangaroo and Tzup.

On March 7, 2012, after living together for over seven years, Ristin and Marko registered their civil partnership.[2] However, shortly after it became possible to register a civil union in Queensland, the Liberal conservative candidate Campbell Newman won the 2012 election, and initiated a suite of anti-LGBT initiatives including annulling all same sex civil unions.[3]

Ristin's fursuit was created in 2006 by Oz Kangaroo's "Critter Country" costuming business. Ristin has worn the suit in the 2006 and 2007 Sydney Gay and Lesbian Mardi Gras parades and at Furry Down Under 2010. Ristin also co-stars in some of Marko the Rat's fursuit videos.

Ristin is a roleplayer and part of Brisbane's small circle of furry roleplayers. (Furry games such as Albedo and Ironclaw are favored.) He is also played World of Warcraft, where he was part of the furry guild Order of the Claws, and Guild Master of Order of the Fang on Bloodhoof server. Ristin is an active member of the furry guild Furrimorph on Guild Wars 2, and naturally he strongly favours Charr characters.

Ristin was a moderator on Reddit's subreddit, /r/furry. In terms of social media, Ristin can be found on Twitter (@RistinRaccoon) and is a self-described "Facebook exile", no longer active on that platform. Due to changes to the TOS of Livejournal, Ristin imported his Livejournal archive to Dreamwidth and deleted the Livejournal account. Ristin's DreamWidth username is Ristin.[4]