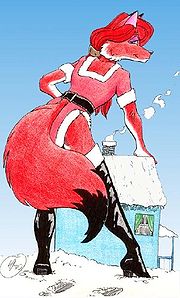 Rio Grande is a giant vixen character, played on FurryMUCK. She is fifty feet tall, and is often found in The Giants' Club.

Rio Grande is the daughter of intrepid professional photographer Max Grande, a red fox from New Mexico, and his wife, a macro arctic fox. Rio inherited her father's coloring and her mother's size. Her dad was a big Duran Duran fan, and thus named her Rio. She grew up among normal-sized furs and even attended college, majoring in dance.

Since leaving college, she has tried to get a job dancing, but it's hard to find such jobs when you're 50 feet tall. She almost had a regular gig doing half-time shows, but then-current public controversies about "wardrobe malfunctions" scuttled that job. She tried acting, even starring in a macrophile film, "Attack of the Fifty Foot Vixen," but being an actress wasn't really for her. She's presently looking for a job.

After an amorous encounter with Jewel, Rio found herself the mother of a half-fox, half-cat daughter, Joya, who soon grew up to be 50 feet tall and approximately 17 in physical age. A rebellious girl, Joya is currently living with Rio's parents. 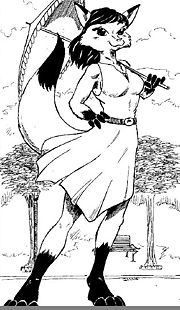 Rio with her parasol, in an early picture by Louis LeClerc.

Rio is a great dancer and knows a lot about music. She has no other known supernatural powers, nor any nifty gadgets or artifacts. She's a little less than fluent in Spanish, and doesn't speak her mother's Inuit language. She can, however, converse in Foxish.

Rio is played by the same person as Lynn Onyx.