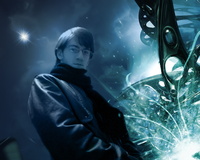 Rino Rex (or just Rino) is a gay anthropomorphic-reptile DJ who resides in British Columbia, Canada. He has a green and beige reptilian character of the same name and career. The character design is strongly aligned with that of Dragoneer with the extended, wing-like ears.

Rino was born and raised in Langley, BC, Canada up until 10 years of age, During the spring-break of 2000 when he was in school he went for a vacation to california to visit his aunt and uncle Theresa and Ken, his aunt Theresa is a website designer and Photographer,hus uncle Ken is a Jumbo Jet pilot. he went there for spring vacation, during the vacation time he visited Disneyland, Universal Studios hollywood and various japanese restauraunts. The vacation had ended after the 2 weeks of fun in California, he boarded the plane back to British Columbia and led on his life for another 5 years. When he was 14 years of age he started getting into various musical genre's, at the age of 15 he grabbed a taste for the Genre called Trance and this had inspired him to an extend of just listening to it from various podcasts and artists, he then decided he was going to choose his career path as a DJ and one day be the worlds best. Though his parents thought it was just a phase he surprised them, another 2 years went by as he was collecting music and working on his own, creating podcasts and working on a few smaller works he surprised his parents and showed them it was not just a phase, it was his chosen career. 2 years later at the age of 19 he is still going strong with his career at a whole new level, now he has made it to the intermediate DJ level in his career and is showing no signs of slowing down.

At the age of fifteen he decided he was going to become a Disc Jockey, and to show the world what he was made of. He has been collecting the various equipment and information to give him a leading edge in this career since he was sixteen.