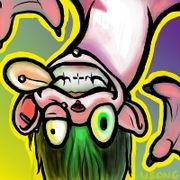 Evol has some problems.

Evol ("love" backwards; born July 1983) is a furry artist and fursuiter, known for being "hir own pride parade" - shi is genderqueer and mostly deaf. Evol is also a furry goon, but mostly nice. Evol was one of the principal artists and writers of the now-defunct non-furry comic Arlo and Shelly. Evol was the Auction Coordinator of Rocket City Fur Meet until hir resignation in 2006.

Evol is most often recognized as a tattooed pink otter, but also with a kirin form. Shi most often draws cheesecake and con badge art these days, and otherwise, considered controversial for hir views against some sectors of the fandom.

Evol had a fursuit of hir fursona built by Joecifur of B3Mascots.[1]

Evol was born to a liberal phone screamer and a conservative nuclear scientist. Shi graduated from the University of Tennessee with a degree in English. Evol is a Texas native, but has lived in the United Kingdom, and most of the East Coast of the USA, before currently residing in Houston, Texas.