Riley Wolff is the fursona of Clint Morrison (June 25, 1991), a furry who lives in Statesville, North Carolina, U.S.A. He has been known to also go by the nicknames Riles, Ri-Ri (either pronounced Ree-Ree or Rye-Rye), and Wolfie.

Riley is a predominantly blue and orange wolf with white fur on his chest, neck, face, fingers, and toes. He also has black fur on his forearms, his lower legs and his ears. A black paw print is on his right hip, the claws wrapping towards his back. His eyes are of a deep purple. This coloration is also called "Blorange" and is very spiritual and deeply meaningful to Riley.

Riley has a lopsided right ear. It lays lower than his left ear in his normal moods. However, in extreme emotion, usually love, depression, or high excitedness, the right ear will move.

He is typically reserved at first, but, once comfortable, will open up. Otherwise he is quite fun-loving.

Riley is very outdoorsy and will frequently spend time walking or running outdoors and enjoys camping, fishing, and biking.

Since early childhood, Riley has been attached to the fandom, though unknowingly for many years.

Riley enjoys anthropomorphic movies, both new and old, and his personal favorites are Disney's "The Lion King" and "Robin Hood". These movies stuck to Riley as a child, as he would complain if he was not able to see them on a usual basis. This grew into an extreme love for animals and, to a young observant Riley, affected his behavior. He grew especially fond of dogs and through their loyalty to him, he learned many traits he exhibits today. This followed him into his highschool years in Marine Corps JROTC, earning him nicknames such as: "The Wolf", "Wolfie", "Lone Wolf", "Alpha Wolf", and "Cadet Wolf".

Following his return home from a 4 month stay in Oklahoma in 2009, Riley soon began to find out about the fandom mainly through friends he made. From there, Riley began to make new friends in the fandom, each being able to tell him more, and the more he learned, the more he knew it's where he belongs.

Riley's fursona began to come into play in the summer of 2010, when he began to sketch and decided to play with colors and different fur patterns, resulting in a lengthy self-conflict until the drafting of his reference sheet on November 18, 2010. 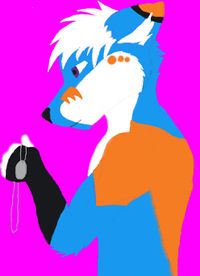 "Some Things in Life" by Riley Wolff

Riley has always drawn since he was a young pup, but never on a daily basis. During school, he was complimented on his steadiness and dedication to his pieces. After his middle school years, Riley stopped drawing until he began to sketch, shortly after joining the fandom. Although he made numerous sketches, his first completed piece was "Some Things in Life..." which he drew shortly after his relationship with Yena Dingo came to a crushing end. The drawing depicts a saddened Riley, holding his dogtags in his paw. The dogtags are significant here in that Riley feels that when he finds his true love, he will give him his dogtags, one of his most protected possessions.

Riley currently draws off and on, mostly depending on his mood, but hopes one day to be able to open up for commissions to the furry fandom. Thusfar, Riley's choice in art is sketching and inking on paper before scanning the ink and using GIMP and a mouse to trace and color in his drawings. Currently,[when?] Riley is trying to learn different effects, such as shading, glowing, and how to draw clothes.