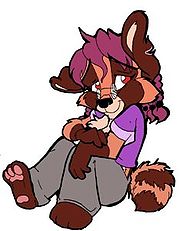 Vinci (Richard Isaac Nicolaides) is a title character in the webcomic Vinci & Arty (his name is correctly pronounced "Vin-chee" "Nee-ko-lah-ee-theece"). Vinci is a 5' 2" raccoon; his likeness is often used by the webcomic's creator, Candy Dewalt, as an avatar. Vinci also has a recurring role in Sue Rankin's webcomic A Doemain of Our Own as well as in David Hopkins' Jack.

Vinci grew up in the Kolonaki Square district of Athens, Greece. He later moved to the United States, where he eventually met and fell in love with Arty Sunspot. His experience with speaking English is hampered by the influences of Greek and Italian he was exposed to while growing up. He is very proud of his Greek heritage and can be quite defensive of it. He is strongly empathetic, but puts the well being of others before himself. Vinci is also characterized by his passive-aggressive demeanor, occasional sulky behavior, and a habit of diverting the topic of a conversation to something else if he wishes to avoid the subject at hand. He constantly struggles with self-esteem issues, which he tends to keep hidden from those he cares about.

Vinci is essentially bisexual and by definition asexual, but he prefers not to be labeled under any orientation. He wants people to see him for his personality rather than his sexuality or gender; this is generally how he sees others.[1]

Vinci's past life before meeting Arty is surrounded with deep emotional trauma. He had been addicted to alcohol and drugs and consequently assaulted (by a character named Jache, whose identity and relation to Vinci is yet unclear).[2]

As a guest artist/writer of Jack, Candy Dewalt has provided an arc and a side-arc of what the fate of Vinci and Arty will be in the afterlife, written with the same dramatic theme as typical Jack stories (the stories with Vinci and Arty may or may not be canon for the Vinci & Arty comic). So far it has been revealed in Jack that Arty dies and is sent to heaven after saving a woman's life; Vinci, afraid to continue living without Arty (and faced with cancer as well), commits suicide and is sent to hell. The strips are about Arty's struggle to help Vinci leave hell and ultimately get into heaven.