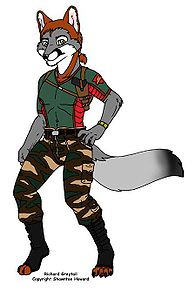 Now I'm on to doing the Solarfox character, characters I hope to someday turn into the webcomic version of Extinctioners. This character was originally supposed to be someone else, but the visual design was not accepted, so I recycled him into a character I had not yet drawn in any form, nor named for that matter. This is now, Richard "Dick" Greytail, Sly's father. It's never really mentioned in the comic what exactly happened to Sly's parents and I had never really drawn them before so this was a good excuse to start. Sly is half greyfox and red fox afterall.

Text is from http://www.deviantart.com/deviation/25906870/ and is from Shawntae Howard