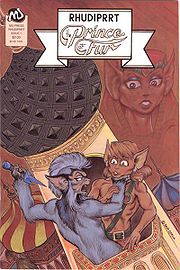 Rhudiprrt is threatened by assassination (cover to #1) 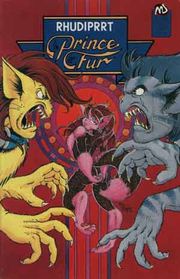 Rhudiprrt: Prince of Fur is a comic book created by Dwight Decker and Teri Sue Wood and published by Mu Press.

The story begins with the death of an elderly and lonely veteran, Warren Schaeffer, whose cat died soon before him. In the afterlife threshold, Warren meets a guardian spirit who tells him of his passage to Heaven, but Warren balks when he learns that his cat, as an animal, is excluded from there.

In the resulting argument, a cat goddess named Ilura intercedes and offers an alternative for Warren over the objections of the guardian spirit. Warren accepts and he is taken to the cat afterlife, where cats are reborn into a humanoid primitive civilization. The goddess takes Warren to witness the assassination of a birth defective prince Rhudiprrt. At the moment of his death, Warren is installed as the prince's body's replacement consciousness and charged with the duty of advancing the cat civilization in some undefined way.

Now, as Rhudiprrt and temporarily unable to speak, Warren must adjust to his new life and face the political intrigues he has found himself in.

After Wood left the series with issue 6, a new artist came on board, but the lost momentum was never regained and after some behind the scenes turmoil, publication ground to a halt with issue 9. Years later, Teri Wood resumed the title on her own, writing and drawing issues 10-12. Despite poor sales Mu Press has committed to publishing a conclusion to the story in a promised graphic novel to be written and drawn by Wood. The status of this resolution project is uncertain. Wood in 2006 has announced she is for now concentrating on recovering from health problems.