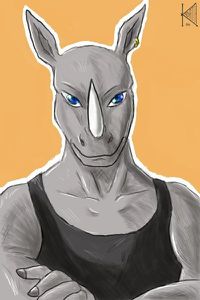 The rhinoceros (coming from the Greek rhino- for nose and keras for horn) or rhino is any one of five living species from the family Rhinocerotidae (including the White, Black, Javan, Indian, and Sumatran rhinoceroses), found in Africa, southern Asia, and Indonesia. They are in the same order of animals as horses and tapirs. They are most widely recognized for the one or two large horns found on the tip of their noses. These horns are used for defense, and are made of keratin, the same material that composes hair and nails. Unlike true horns, they lack a bony core. Due to poaching for these horns by humans for the purpose of decoration and traditional medicine, all species of rhinoceros are considered at risk for extinction, with three species being critically endangered.

Rhinos are one of the more rare mammals used in furry art. Notable rhino characters include the fursonas of artists Roary Pachyman and ZakRhyno, and the character Vince owned by Kadath. Rhinos are also included in the comic strips Storyline of Kevin and Kell, Européen Chateau, Pluggers, and Endtown, as well as in the television show Street Sharks. Although, the most notable Rhino character most people would know would be Rocksteady from Teenage Mutant Ninja Turtles.