Rhia Timeless (formerly and interchangeably known as Rhia Paradox) is a therianthrope and furry psychology enthusiast from the United States.

Rhia is a winged wolf, most often portrayed in anthropomorphic form. She is also occasionally pictured as an red, brown, gray and cream Eurasian Wolf, with vivid green eyes and large, black, feathered wings with tips of pure silver. 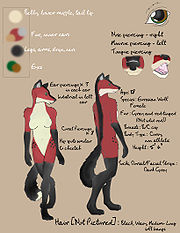 Rhia did not always have that name; when she was first developed as a role-play character in the Neopets guild 'Destiny Wolves Pack', her name was Keira Nightstorm, or occasionally Keira Moonpaw, named after a combination of childhood nicknames. At the time she was used mainly as an online character and as a secondary character in a collection of short stories entitled Nightstorm's Pack.

Though the name changed to reflect more accurately her real life counterpart's personality, the form stayed more or less the same, the only difference being a hair color change in the anthropomorphic character from jet black to a deep, almost black auburn, which also served to portray herself a bit more in her fursona.

The name Rhia is short for Rhiannon, a name shared by a goddess in Welsh mythology, though Rhia herself was not named for the deity

In April 2008, Facepaw! Forums and blog was created through freeforums.org and is currently under construction, with no definite release date yet.

Rhia was born in early 1991 to a "military brat" mother and a half Vietnamese father, which is why Rhia eventually became more specifically classified as a Eurasian Wolf instead of just the generalized term "wolf".

While she grew up with a general awareness of her inner fursona, she did not discover the the actual furry fandom until the fall of 2007, when she met Zzakerhyus and did some research. She began to realize the parallels between the fandom and her own history of role-playing. She soon became an active part of the fandom, helping new furry fans integrate into the community and generally being an all-around nice person.

Rhia has continued to feed a growing interest in the psychological and spiritual aspect of therianthropy, and hopes to someday be well-versed enough on the subject to write a book on the topic.