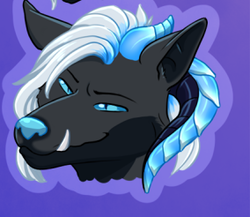 Rhae'sor's fursona is a demon/jackal hybrid with black and grey fur and white and blue streaked hair., along with four horns growing from his head

On September 2, 2020, Nathan Begnell was charged for 303 charges of transmitting child pornography and other counts of possession.[1]

Nathan Begnell was denied bail and remanded in custody, due for a court appearance on January 8 2021. [2]

In response to the arrest, the affiliated service Starpaw Network released a statement:

and terminated all services, with a future plan to rename the network in order to distance themselves from Mr. Begnell.[citation needed]