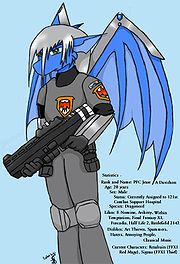 Rez Radgrif (real name Jesse; born July 1st, 1986) is a furry who lives in the United States. His fursona is a dragon/panther hybrid. He is currently unmated on Second Life, following the real life death of his mate, Ashe Scribe in mid September of 2009.

Rezalrain Radgrif, a silver haired, blue furred leopard-dragon, his first Fursona evolved from a forum based RPG that was loosely based on Megaman, as he started as a half-dragon, half-cyborg. As he grew distant from it, he became based more in military tactics, and thusly thrust himself into Battlefield 2142, in which Rezalrain is a Colonel, of his own unit the 5th Anthro-Walker Group.

Lucian Mooncrest (Or Dewoitine, as he is known in Second Life), a dark purple haired, black furred panther-dragon, is his second fursona. Lucian was based on many Furcadia Roleplays, then with his sister Renae Silvermoon (once portrayed by Esmeradin). His scars on his form are all scars that were inflicted upon him by his sister. The gash that runs from his left eye to midcheek was caused by his sister clawing him, which left him partially blind. The scars on his shoulders and chest are from many battles with others (though he decided to dye his fur red in these areas, for reasons unknown). The last scar that he has is in his chest, where he was run through with a saber, by Renae, but she missed by only a few milimeters. Since this RP, he has been significantly developed and adapted into a new furson, abandoning Rezalrain almost completely. Lucian was also deeply based in military tactics, being a hybrid of the union between a black panther and a dragon (possible ties to Rezalrain), being a Lieutenant Colonel for the 3rd Special Forces Brigade (BF2142).

A link is known between these two fursons, as they do not know it themselves, but their mother, Kalairah Silvermoon, a partially draconic female met both of their fathers, Alaron Radgrif, a snow leopard, and Zenith Mooncrest, a black panther. Kalairah mated both Alaron and Zenith, producing live births, unlike other dragons (which likely lay clutches of eggs), which suggested she was not as draconic as she thought. The boys were separated and raised by their fathers, in which both of them cross paths again when in Officer Basic Training after the first Titan War (2142 storyline).

While much is unknown about Rez in real life, as he is rather reclusive, only being seen by a few furries at the NoVA Fur meets, as well as Sir Kain's "KainCon" and "New Years Eve Bash", he is known to be an Ex-Army Medic after being wounded in a tour of duty. He has an avid fascination with flight, and is pursuing this dream. It is suggested that he chose half-dragon fursons due to his fascination with flight. He currently resides in Fayetteville, North Carolina.

Lucian can be found in many games online, while he chooses whom he plays with, he is commonly seen in Second Life in the sim Verklund as an Offizere in Vanguard, out on his own or with his close friend Kara Taggart. His Second Life character is a custom character created by Wingless Emoto, with assistance by Renissy Slade. In EVE Online, He has been known by many names, as he has been an avid player since early 2005. His oldest character, Rez Radgrif (appropriately named) was a Gallente whom was crosstrained in many different aspects of combat. He lost this character shortly after taking a break, when someone hacked this account and proceeded to move billions of illegal ISK over the course of 72 hours. He restarted his character as Pheonix Firehawk, a Caldari. In other games, he can be found on steam under the handle jetazuma. He avidly welcomes friends for gameplay.

While he started out at age 16, as a DJ for Radio Alphaville (Now defunct), a Sims Online (also defunct) radio station, he progressed and grew as he moved from RAV to Fueled Radio (Also defunct). When Sims Online finally closed it's doors, he moved to Earth and Beyond, a space-faring EA adventure, creating EnB Radio, ran by himself. When Earth and Beyond had it's final "sunset" (the final shutdown of the server), he was not heard from again until late of 2008, when he signed up to DJ for Eve Radio. He was originally known as DJ Trident, playing mostly Metal and Hard Rock, he ran a 0300-0600GMT slot. After 5 months and running into technical difficulties, he forced himself off-air until he could rebuild his system. After the rebuild, he reapplied as DJ Radgrif, which he currently hosts various cover timeslots, as well as his own show the "10 Minutes to 10 Million ISK" contest, at 0600-0800 GMT. His replays can be heard at http://complete.gamingradio.net/media/eve-radio-rewind