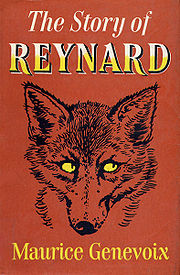 Front cover of The Story of Reynard by Maurice Genevoix (translated from the French by Margaret Crosland), as published in 1959 by Hamish Hamilton.

Reynard the Fox, also known as Reynard the Red Fox, Renard, Renart, Reinard, Reinecke, Reinhardus, Reynardt, and Reynaerde, is a trickster character in a series of beast epics known as Le Roman de Renart, which date from around 1175.

The Le Roman de Renart, or Romance of Reynard began as a series of Old French poems by a varied assortment of authors, usually anonymous. The stories can be traced to a number of older texts, most notably Ysengrimus, which were the direct inspiration for the first stories[1].

The stories are among the little political satire from the Middle ages that still survives. The various animals were represented as various members of the aristocracy and the clergy. Human characters were often peasants.

Since the Reynard stories were not written by one person, and various parts of the stories were written without any collaboration, the character of Reynard shifts from a Robin Hood type hero to a villainous rogue, and anything in between.

However, there are a few similarities between all versions. Reynard is a noble in the animal court, and he lives in a structure sometimes referred to as a den, and sometimes as a castle known as Malperdy with his wife, Hermeline, and his three sons, who are known by various names in different episodes. He is a trickster, first and foremost, and his relationship with his uncle, Isengrim the wolf, is at the core of the story. Though once partners in crime, they have since become bitter rivals when Reynard repeatedly fooled the less savvy Isengrim.

Once again, since the story was written by many different authors, there is no complete storyline to the beast epics, but only episodes. The only thing binding the different stories is character of Reynard and eight syllable rhyming couplets in which the stories were told. However, there were some attempts to put the Reynard stories together, and attempts were made at a beginning and an ending.

The beginning of the story is usually a meeting of the animal court. Various animals accuse Reynard of crimes, though most vocal are Isengrim the wolf and Chanticleer the rooster. These two charge Reynard with adultery and murder, and it is decided that Reynard is to be hanged.

Various animals are sent to collect Reynard, but only Grimbert the badger, Reynard's nephew, is able to convince Reynard to defend himself at court while avoiding one of Reynard's tricks. Reynard appears at court, and is able to trick king Noble the lion into letting him go.

Eventually, Reynard murders a rabbit, forcing Grimbert to summon his uncle to court yet again. Reynard once again tricks the king, but this time, Isengrim challenges him to duel. Reynard is able to win the duel through trickery, and is given a high status in the court. Eventually, Isengrim is able to challenge Reynard once again, this time to a game of chess. Reynard, overconfident and drunk, loses the game, as well as a bet giving Isengrim claim to any part of his body that Isengrim chooses.

Isengrim wounds Reynard after this loss, and Reynard is thought dead. His funeral is held, and his old enemies come and eulogize their enemy. Reynard revives, however, only to be attacked by Chanticleer, who seems to kill him in a nearby river. In fact, Reynard only pretends to be dead, returning to his wife and children at Malperdy while everyone thinks him dead, inspiring the most quoted line in the epic, usually translated as "Yet Reynard still lives on."

The character of Tybalt from Shakespeare's play "Romeo and Juliet" is named after a cat from the Reynard stories. The character of Mercutio taunts Tybalt with this fact, as the hot-headed Tybalt is very different from the cowardly cat.

The "Nun's Priest's Tale" from the Canterbury Tales by Geoffrey Chaucer uses a variant of a Reynard story.

The film "Van den vos Reynaerde" was completed in 1943 by Dutch animators, and it was meant as a sequel to the Reynard stories. However, it has not survived today as it was Nazi Anti-Semitic propaganda, and it was deemed flawed, as a fox "good guy" was deemed unbelievable. (Ironically, this was one of the few times Reynard had been shown as an out and out hero.)

In 1851, anthropomorphic taxidermist Hermann Ploucquet depicted the story of Reynard in a series of six tableux using stuffed fox cubs.