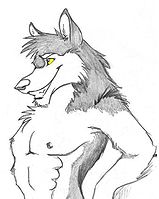 Riley is a wolf-dragon hybrid in species.Wolfdragons are more commonly seen as a draconic looking creature, smaller in size, usually completely covered in fur in place of where scales should be, often lacking wings, and often seen with either canine ears or horns. Another variation of a wolgan is a wolf with draconic wings and horns, sometimes half scales, sometimes not.