Revolution FurFest Chile, or RFFC, is the first hotel-based furry convention to happen in Chile that took place on January 11, 2020 at the Mr. Hotel (also known as Neruda Hotel) in Santiago. 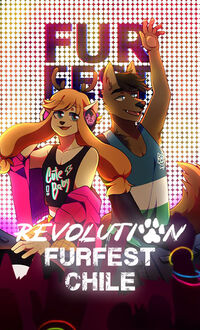 The convention was announced on August 3, 2019 through the Bobby Team Facebook page. Two days later, 4 different types of tickets for the event went on sale and it was announced that this would take place at the Mr. Hotel (also known as Neruda Hotel) located in Santiago. During the following months the invited illustrators, the schedule, the charitable foundations present and other information were announced.

On December 3, 2019, Bobby Team announced that the tickets for the convention sold out.

The event's schedule was announced on November 8, 2019. The event will have activities similar to those of other conventions such as Fursuit parade, rave party, dance competition, opening and closing ceremonies, etc.