revinyesvr is a furry artist who has made endeavors into many types of digital art, including 3D shape constructions and fractals, but has yet to really succeed as far as putting pen to paper goes. It has also written many different stories in different places, including Ashes to Chaos and Yume ni Naru. It also dislikes capitalizing it's long name.

Riva was born in 1989. It has almost always had pets, whether they be fish or feline, though it's only recently it's been more accepting towards most canines. The one exception to the fading dislike, when it was still strong, was wolves, after watching Balto a few dozen times as a kid.

Almost as soon as it discovered the furry community, it developed an interest, though the exact timing is unclear. Since then, most of the characters it's written for have been furry characters, as well as a few unsuccessful attempts at drawing furries. 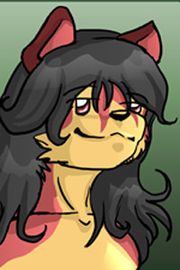 revinyesvr has two main fursonas and a secondary one created by it's mate for the comic Truer Words.

Revi is revinyesvr's male fursona. Revi is a fiery wolf with red fur and black hair. Revi was most commonly seen with Aya, the female incarnation of LunarYouko's original fursona, though he did appear once or twice with Ayame, Aya's male counterpart. Though Revi is officially a fursona, he also appears in other places around the net in human form, if there's no other option. Revi's feral form and anthro forms were the first non-abstract definitions of the character, as he'd previously had no visual form to take. Blame that on a decidedly abstract mind.

Riva is Revi's female counterpart. They are very similar in appearance and share the same fur patterns. Riva has been seen with both Ayame and Aya, depending on which way they're feeling at the time. Riva is short for rivanyasi, the feminine equivalent of Revi's longer name. Though revinyesvr prefers to use that name as a screen name, Riva is just as appropriate a form of address, as she represents just as much, if not more, of the personality behind the fursona.