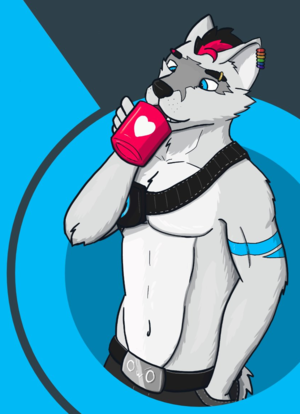 Replic TuaniOne (born December 17, 1990,[1] in the Netherlands) is an digital artist / Content Creator who lives in Dordrecht, Zuid Holland, the Netherlands.[2]

Replic owns a community called Furbulous, a gay themed community showing male art where both he and others can share their art. In August, 2013, Replic started an international furry fandom gaming clan called TuaniFur Gaming, since 2014 the clan resumed under a different name called FUR Gamers and in the second half of 2017 it was ended. In 2018 he began with streaming on Twitch and restarted doing art in 2019.

Replic TuaniOne is a mix of wolf and fox, so called wolfox. He has gray fur and a raccoon-like eye mask,white fur on his chest and belly, blue stripe markings on his top arms and a blue stripe on his back and tail and wears rainbow colored earrings, has a gold piercing in his left eyebrow, a hotpink stripe on his right eyebrow and hotpink hair on the left, sometimes wears his collar with REP and wears a black or blue pants or nothing at all. In 2017 this changed to a harness that goes over his top body, it shows his R21 Logo and his name on it.

Replic enjoys playing first-person shooters, mostly with a futuristic theme in it, this changed however in 2016 with playing more spaceship simulators like Star Citizen and Elite Dangerous. Besides making anthropomorphic animals he also makes logo's and wallpapers with photoshop. In 2017 this changed to Procreate for drawing and Affinity Photo and Designer for logo making and editing.