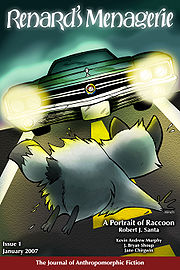 The cover of first issue of Renard's Menagerie dated January 2007.

Renard's Menagerie: The Journal of Anthropomorphic Fiction was a small press literary magazine that was founded in early 2006. The quarterly magazine published its first issue in January 2007, and its eighth and final issue in November 2008.

Head editor Foxeris began the magazine as an outlet for anthropomorphic stories, both of the type familiar to the furry fandom as well as other usages of anthropomorphic angles in genres beyond the furry subculture.

The magazine distinguished itself by paying all contributors to the publication, both the authors and the artists. Authors were paid at one cent per word, and all art was purchased on commission. Yearly subscriptions were made available.

Renard's Menagerie was published as a trade paperback with a full color cover and black and white illustrations inside. Printing was done though the print-on-demand service Lulu.com, allowing back issues to continue to be available. Each issue could be ordered from the magazine's web site.