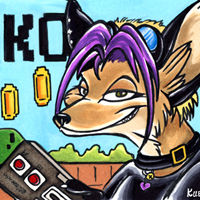 Reiko, as drawn by Kubo

Reiko Sazanami resides in northwest Pennsylvania, and is a student of animation and an avid artist, and also a furry artist. Despite her name, she is not in fact Japanese or of Asiatic origin, as others have speculated. It was a nickname given to her by one of her first online friends back in the mid-nineties. It stuck even after the friend left and became her alias for most anything related to the Internet.

Reiko belongs to or participates in several LiveJournal furry-related art communities, including 100x100 Exchange, and Fursuit and moderates Clean Furs.

She currently attends a university in northwest Pennsylvania.

Her fursona is a roflfox (mixed-breed fox), being a cross between a red fox and a fennec with "just a pinch of shark and goblin". Her distinguishing features include purple hair fronts, tail tip and back claws.

An artist and animal lover since a young age, Reiko grew up in a small sub-rural town in northwest Pennsylvania. Growing up in the late 80s and 90s, she developed an interest in cartoons and animation, further spurring her creativity. Over the years, she has kept many pets of several species, most notably her parents' cats. In her teenage years, video games took the center stage of her interests, leading to her decision to study art and animation in the hopes of making it into the video game industry. Due to a change of heart in early 2007, however, she has since changed her focus to study art education. She claims no real influence to her own developing art style, but draws inspiration from artists such as Bob Rafei and the classic Disney and Don Bluth films, along with a pinch of anime stylings as well.

Reiko attended school in the same district for all 13 years of her primary education, and went on to move an hour north to attend her current university.

Reiko's is a direct reflection of herself in style, body type and personality. Her fursona began forming around 9th grade, and was originally an anime fox girl. This gradually shifted to a red fox furry, a green haired fox girl, a red fox girl, a blonde fox, and finally settled into the mixed-fox she is known as today.

On occasion, she is mistaken for Lacrimas, who shares a similar appearance, but separate species, build, and attitude. This has resulted in one near fight, but was quickly resolved by a third party.

She also has several other furry characters that do not act as her fursona that appear in her work, including Platano (chupacabra), Goonie (mutt), Demetrius (long-hair chihuahua), Adonis (greyhound) and Sylvia (feral gryphon).