Redford Firefox is a character in Extinctioners. He first appeared in Extinctioners volume 1, issue 1 (story and pencils by Shawntae Howard, inks by Malcolm Earle, and color by Eric Blumrich and Scotty Arsenault). 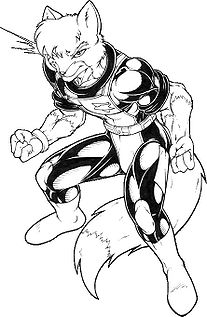 Leader of the The Solar Foxes, Red is a pyrokinetic, yet his personality is far from the traditional hot-head stereotype (Shawntae once said he was practically a boy scout). Not only is he pre-mates with Scarlet, but he's also the son of a well-respected member of the Solar Strike Force. When the attack on Alopex came, he led his crew right into the firefight but before long realized that their efforts were becoming more and more futile as the battle raged on and ordered to evacuate the station. Being the only known survivors of Alopex, the Aldenian government recently captured them and nearly had them court-martialed for desertion of their post, but offered them to go on a top-secret mission to a worm hole outside of Alden's orbit in attempt to drop the charges. Red doesn't necessarily trust his orders, but knows that it's the only way his team can stay out of prison, or worse, be turned into a living hybrid research experiment.